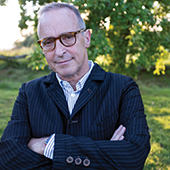 An Evening with David Sedaris

David Sedaris is one of America’s preeminent humor writers, with best-selling books including Barrel Fever, Holidays on Ice, Me Talk Pretty One Day, Let’s Explore Diabetes with Owls and Theft by Finding: Diaries (1977-2002). His pieces regularly appear in The New Yorker and have twice been included in The Best American Essays. His latest book of essays, Calypso, was a New York Times best-seller and a Washington Post Best Book of the Year.

Sedaris’s original audio pieces are heard often on This American Life and other public radio programs. He has been nominated for five Grammy Awards for Best Spoken Word and Best Comedy Album. In 2018 he was awarded the Terry Southern Prize for Humor, and in 2019 he was elected to the American Academy of Arts and Letters.

“Sedaris’s droll assessment of the mundane and the eccentrics who inhabit the world’s crevices make him one of the greatest humorists writing today.” – Chicago Tribune

An Evening with David Sedaris