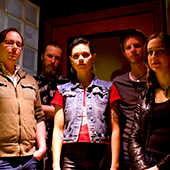 Veseria
Led by the husband/wife songwriting team of Patrick and Jen Roberts, Veseria is an Indianapolis band that mixes rock, folk, blues and punk into a fusion that defies categorization. Their 2017 Romanus Records release, RLTVTY, was met by praise from critics and fans alike, with HuffPost describing the album as “dynamic and visceral” and Tattoo.com calling it “a burning flame of passion and desire.” Having performed alongside a range of acts from Panic! At the Disco to Lynyrd Skynyrd, Veseria is a regular at local music festivals and soon will release its third full-length album.
Continue Shopping