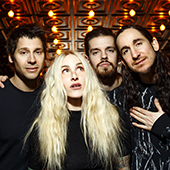 Walk Off The Earth
Canadian indie-pop band Walk Off The Earth is known for unconventional arrangements, catchy original tunes and innovative covers that have made them a YouTube sensation. Their brilliant five-people-playing-one-guitar interpretation of Gotye’s “Somebody That I Used to Know” has attracted more than 187 million views, and their video of Lorde’s “Royals” was featured in the 2014 Grammy Awards telecast.
More recently, the multiplatinum-selling group has scored hits with “Red Hands,” “Fire In My Soul” and “Rule the World” and has collaborated with artists including Keith Urban, Snoop Dogg and Steve Aoki. They promise an intimate and interactive experience on their current world tour, which supports the new, fifth album, Here We Go!

Walk Off The Earth